A new lease of life for sailing and sailors :
Ulysse Nardin and the "Vendée-Arctique-Les-Sables-d'Olonne 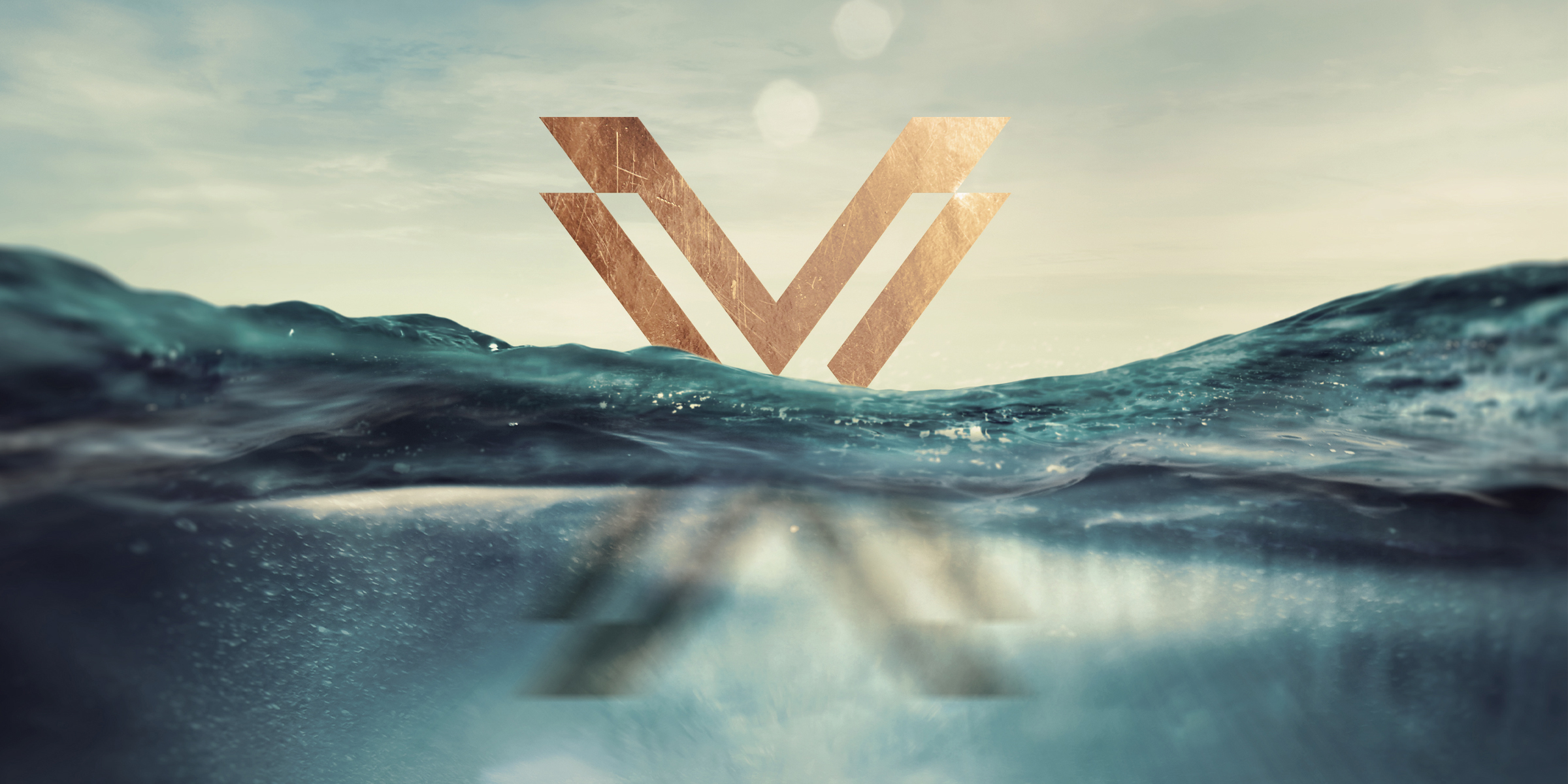 While most of the major sporting events this year have been cancelled, Ulysse Nardin has been confirmed as the official timekeeper for one of the rare sporting competitions still on the calendar for summer 2020: The ocean race qualifier for the Vendée Globe, the "Vendée-Arctique-Les-Sables D’Olonne".

A 'foreword' to the history of the Vendée Globe

In November 2019, Ulysse Nardin announced that it would be getting involved with the most gruelling solo sailing race; an epic challenge: the Vendée Globe solo non-stop yacht race around the world without assistance. In the spirit that unites it with the intrepid explorers and adventurers of this world, Ulysse Nardin is now giving some thought to its partnership with "The Everest of the Sea" by becoming the official timekeeper of a major first, the Vendée-Arctique-Les-Sables d’Olonne, launching 4 July – the final race before the Vendée Globe. Northwards! 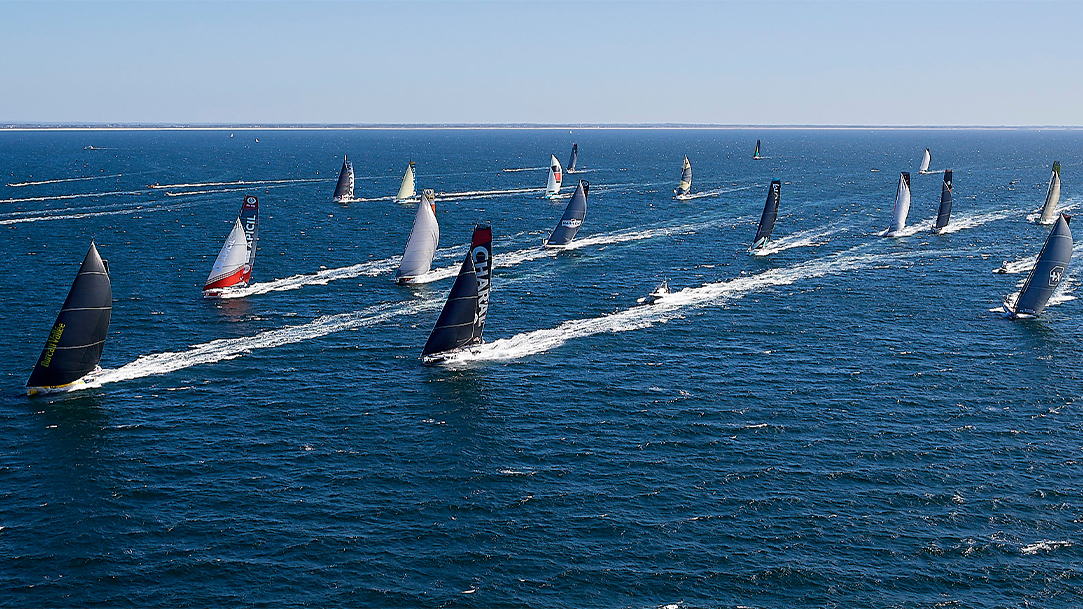 A unique and demanding post-lockdown race

The first sporting event to be resumed after lockdown, the Vendée-Arctique-Les Sables d’Olonne has a cheerful and optimistic message. Most of the competitors have not been able to go sailing for several months given the situation, so are keener than ever to take the helm and make some waves. Exploration of the sea and self-exploration as the only outlook. Preparing for the biggest challenge of their lives in extreme sporting conditions. They won't be waiting much longer, as the start date is in the diary in under 3 weeks’ time, 4 July 2020. 3,600 nautical miles (approx. 6,600 kilometres) solo, on an innovative route around a large triangle culminating near the Arctic Circle (60°N), passing through Iceland’s volcanic region and the deep blue of the Azores. Before flirting with the 60°S during the Vendée Globe, the IMOCA Class skippers are going to venture far north for the first time: solo, non-stop and without assistance. Ten to 12 days sailing in sea conditions little known to skippers. But that's not all! There will be no night-time in the middle of summer when approaching the Arctic Circle. It’s sure to play havoc with the sailors’ body clocks and really put them to the test beneath a sky that never sleeps. This race will effortlessly convey values dear to the watchmaking Manufacture: nature, excelling oneself and exploration. Just like the Vendée Globe, the Vendée-Arctique-Les Sables d’Olonne is not for those who doubt their capability. This is a competition only for those sailors who are ready to push their limits, confront their fears and the incredible force of nature in order to complete an epic adventure, their own Odyssey. A unique preparatory 'prologue' to experience the kind of stormy and wild conditions encountered during the Vendée Globe. This short race will allow skippers to test boats just back from the yard and for some to qualify for the Vendée Globe. A real mental and technical 'warm-up' to test their limits and break in their boats, approve any changes, enter into the spirit of the Vendée Globe and qualify.

The Ulysse Nardin challenge: A race in a race to celebrate an already legendary route

The IMOCA Class and Vendée Globe Race Management have been working side by side to replace the two solo transatlantic races that due to the COVID-19 crisis could not take place as planned in the spring. Originally, the IMOCA Globe Series championship included two transatlantic races at the start of the 2020 season: the Transat CIC in May (Brest-Charleston) that got cancelled, followed by the Transat New York-Vendée-Les Sables d’Olonne, which has been reinvented, giving rise to this unique route to the Arctic.

Through their partnership, the IMOCA Class and Ulysse Nardin have decided to add an extra dimension to this adventure in the far north by creating the Ulysse Nardin Challenge: a race within a race to reward the 1st skipper-adventurer to pass the COI-UNESCO Waypoint (62°N-25°W). Very fitting for a watch brand born out of nautical navigation instruments. The first to achieve this milestone will receive a lucky Ulysse Nardin 44mm blue DIVER, a call to adventure strapped to the wrist. 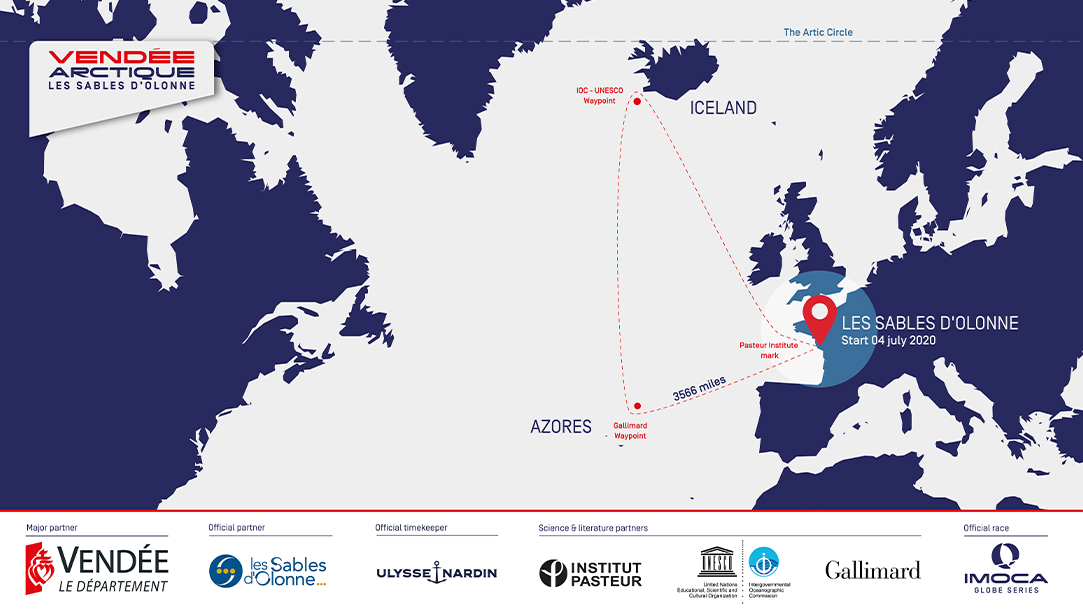 The route is triangular in shape. One of the basic shapes in geometry, the triangle evokes the symbolism of the number 3. In many traditions, it reflects the notions of determination, power and fire, as well as stability and balance in architecture. You can see three important crossing points for skippers, three virtual beacons for the race’s three "science and literature partners": The Pasteur Institute, COI-UNESCO and Éditions Galimard.

"Ulysses conveys images and above all, stories that have permeated western culture. The character is over 2,000 years old, featuring in Homer’s work, in the Iliad, then in the Odyssey. He is in a boat. He has the most incredible adventures at sea. The sirens’ song… the Cyclops… Ulysses is ingenious, cunning, extraordinarily clever. He thinks faster and above and beyond others. He is an adventurer. He knows how to wait, he knows how to persevere, he is courageous, he enjoys discovering and exploring. Those lining up for the Vendée-Arctique-Les Sables d’Olonne embody the values of Ulysse Nardin: courage, temerity, adventure and selflessness. They are "Ulysses" too.

"We are delighted to welcome Ulysse Nardin on board as Official Timekeeper of the Vendée-Arctique-Les-Sables d’Olonne. It is a collaboration in keeping with the partnership that the brand has with the Vendée Globe", said Antoine Mermod, President of the IMOCA Class. "The prologue to the solo round the world race, this event – designed with this unique journey to the Arctic Circle – will attract skippers and their boats while taking them on a real sea voyage. What better brand than Ulysse Nardin, which speaks to adventurers, to support us in this major first for the IMOCA fleet."

No pontoon, no public

Of course, everything is being done to protect skippers and the event team is adapting to the current health context. Among other things, a strict 5-day confinement period is planned before the racers set off, as well as serological testing. There will be no departure village on site, or public reception. The sailors are invited to go straight to the starting line from their home port, without passing by the pontoons. The arrival plan may be more flexible if the situation allows it, but for now, the precautionary approach dictates a strict framework and organisation focused on the competitors, on safety and 100% digital communication.

"Ironically enough, the sailors should be experts in confinement, owing to their experience solo sailing on the open sea. What the sailors experience during their time at sea is strangely reminiscent of the confinement that we have just gone through"