Ulysse Nardin lights up the bay of Monaco
with the Grand Feu! 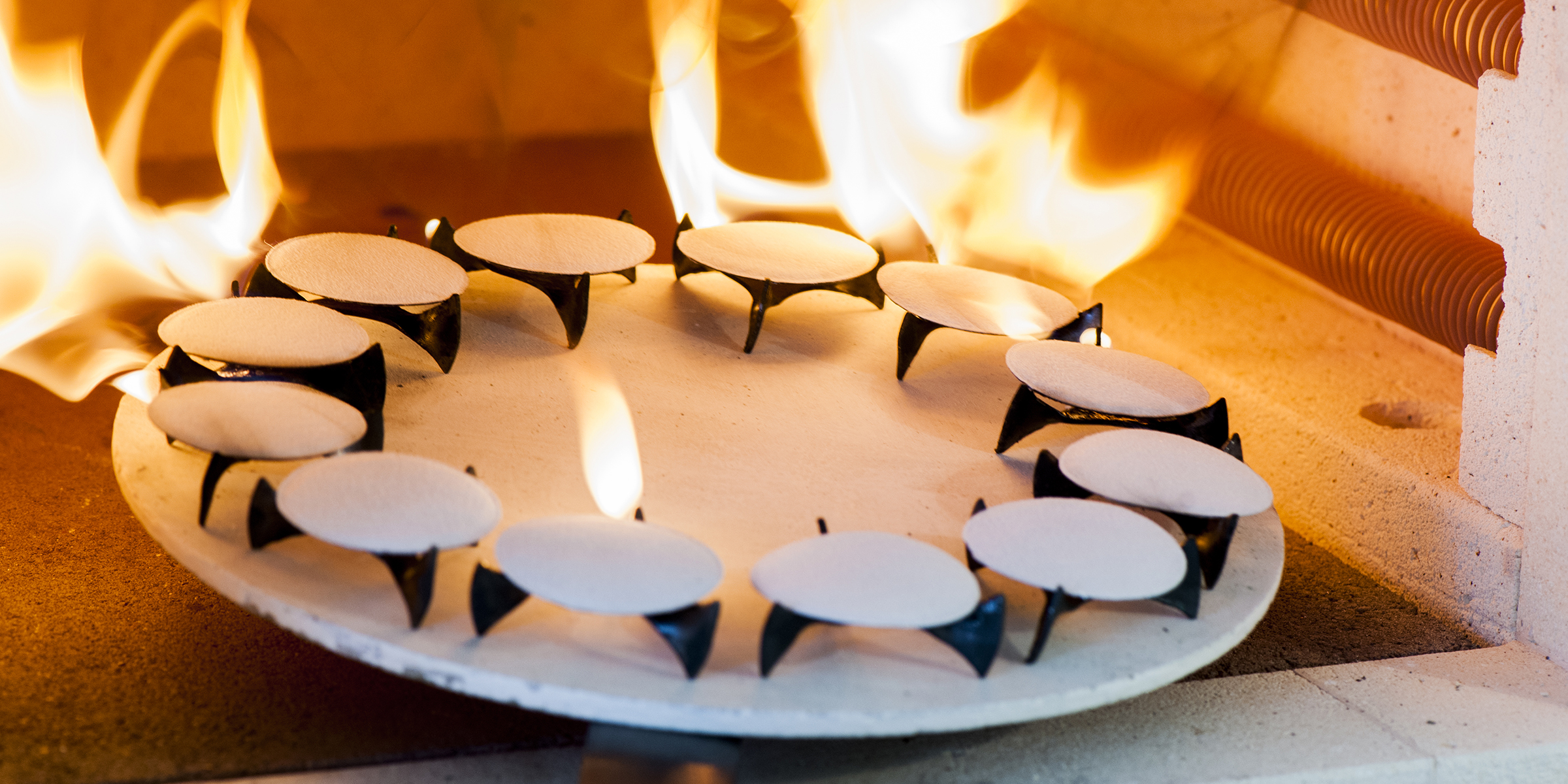 In honor of the most prestigious yacht show in the world, a new recruit limited to 100 pieces with a grand feu enamel dial joins the ranks of the Marine Torpilleur squadron. Ulysse Nardin reminds us of its perfect mastery of this age-old craft that reflects its maritime and military history.

This year, the Monaco Yacht Show once again welcomes lovers of sumptuous yachts, incredible destinations and luxury getaways in Port Hercules. In this idyllic setting, Ulysse Nardin, official sponsor of the show, presents its new arrival in a limited edition of 100 pieces: the MARINE TORPILLEUR MONACO YACHT SHOW. Since its very beginnings, Ulysse Nardin has focused its attention on the nautical world. With this new timepiece, the Swiss Manufacture reaffirms its standing as the watchmaker of the seas. From September 25–28, 2019, the show’s visitors and fine watchmaking aficionados can discover the brand’s new models in the Upper Deck lounge.

Guardian of the brand’s strong ties with the sea, Ulysse Nardin’s Marine collection welcomes a new addition limited to 100 pieces. Showcasing its expertise, Ulysse Nardin adorns its MARINE TORPILLEUR MONACO YACHT SHOW LIMITED EDITION with a Grand Feu enamel dial. The watchmaker enjoys the mastery of this craft within its own corporate structure thanks to Donzé Cadrans, owned by Ulysse Nardin, which produces enamel dials in keeping with the purest traditions. Dial enameling is an age-old craft for which formal training no longer exists—today’s craftsmen are all trained in the workshop.

The Grand Feu enamel technique is a delicate, ancestral practice. The term “Grand Feu Enamel” refers to the vitrification of mineral materials. All of the work is carried out by hand and it is not unheard of for the dial to break throughout these different operations, making these creations all the more precious and sought after.

A copper base is dusted with enamel—white and gray enamel for the Marine Torpilleur Monaco—then fired at a temperature of approximately 800°C.

The second step consists in affixing the indexes and inscriptions on the dial using dyes composed of enamel powder. The dial is then fired once again, in order to fuse this new layer of enamel and to level the surface of the dial, which means that it is flattened by a piece of carbon. This operation requires a very high level of skill and accounts for a large portion of waste as the carbon may leave marks on the enamel.

The dial’s diameter is fitted to the case, then the openings of the two added subdials are fit to size. The chamfering of the two subdials is adjusted using a file in order to assemble the parts. The gray power-reserve and small-seconds dials are then tin-soldered to the white dial.

Thanks to its mineral composition, the enamel dial is immutable and resistant to UV rays. 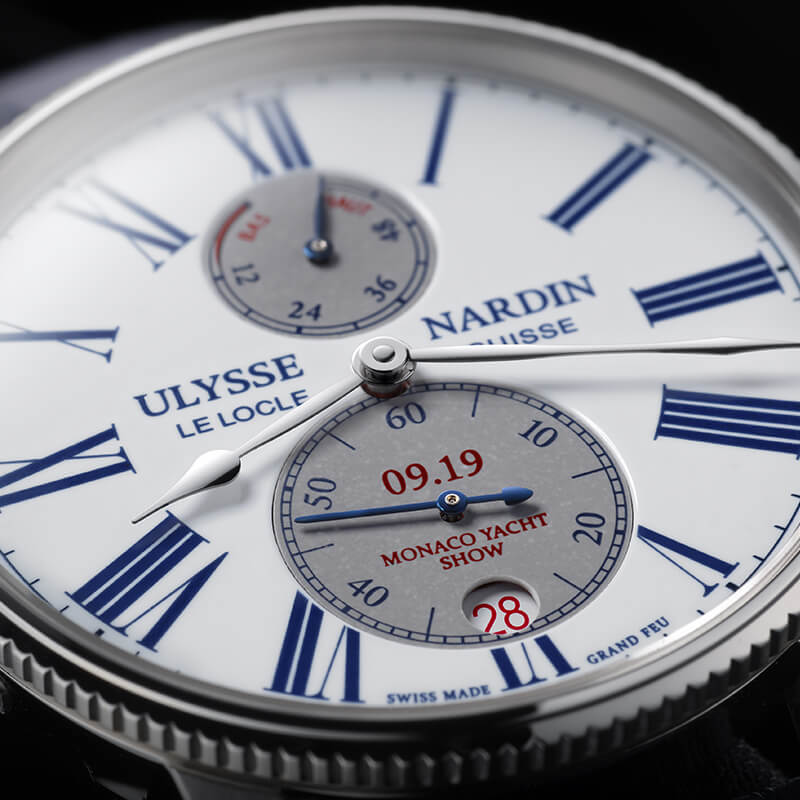 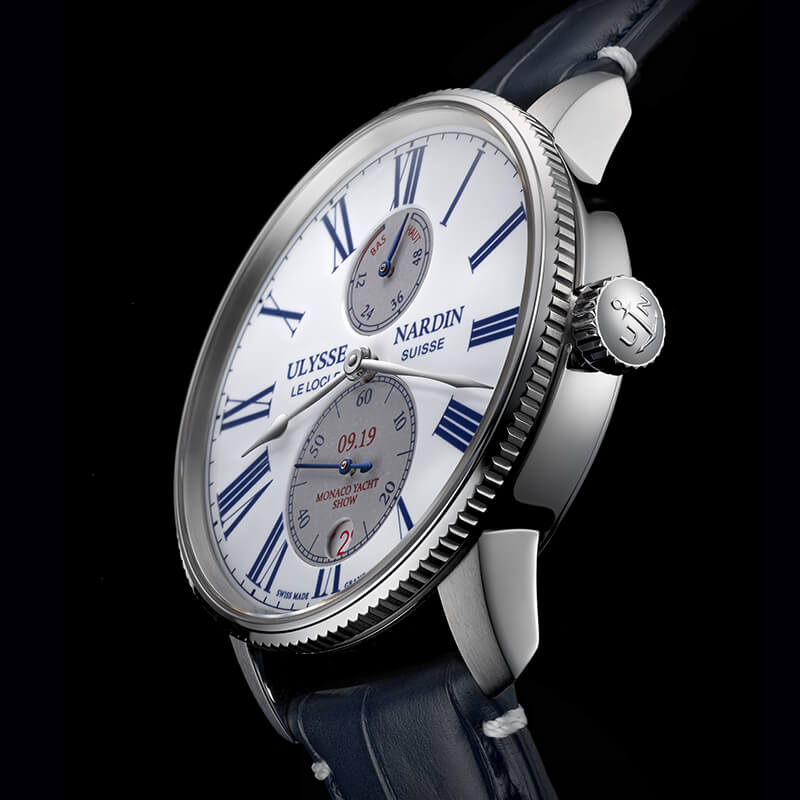 The Marine Torpilleur timepieces take their name from torpedo ships, small and very agile old vessels used in the 19th century. Perfectly suited to modern city life, the Marine Torpilleur is at once extremely comfortable on the wrist and pleasing to the eye. A true captain’s chronometer certified by the COSC and Ulysse Nardin, it embodies the best of contemporary watchmaking design and the peak of craftsmanship and expertise going back several generations.

Elegant, elongated blue roman numerals and graceful pear-shaped steel hands indicate the hours. The screwed-down crown is engraved with the Ulysse Nardin logo. At 6 o’clock, on the small seconds subdial, lie the date aperture and the inscriptions “Monaco Yacht Show” and “09.19” in red, a reminder of the annual event held in the principality. The date aperture reveals the numbers 25, 26, 27 and 28 in red to highlight the dates of the show. The timepiece rests on a blue alligator strap with white ‘point-de-bride’ stitches—a final nod to the nautical world.

The watch is driven by the UN-118 Manufacture movement. This automatic-winding caliber, featuring a power reserve of 60 hours (indicated by a subdial at 12 o’clock) and equipped with a silicon anchor escapement, is a gem entirely designed by the Maison. 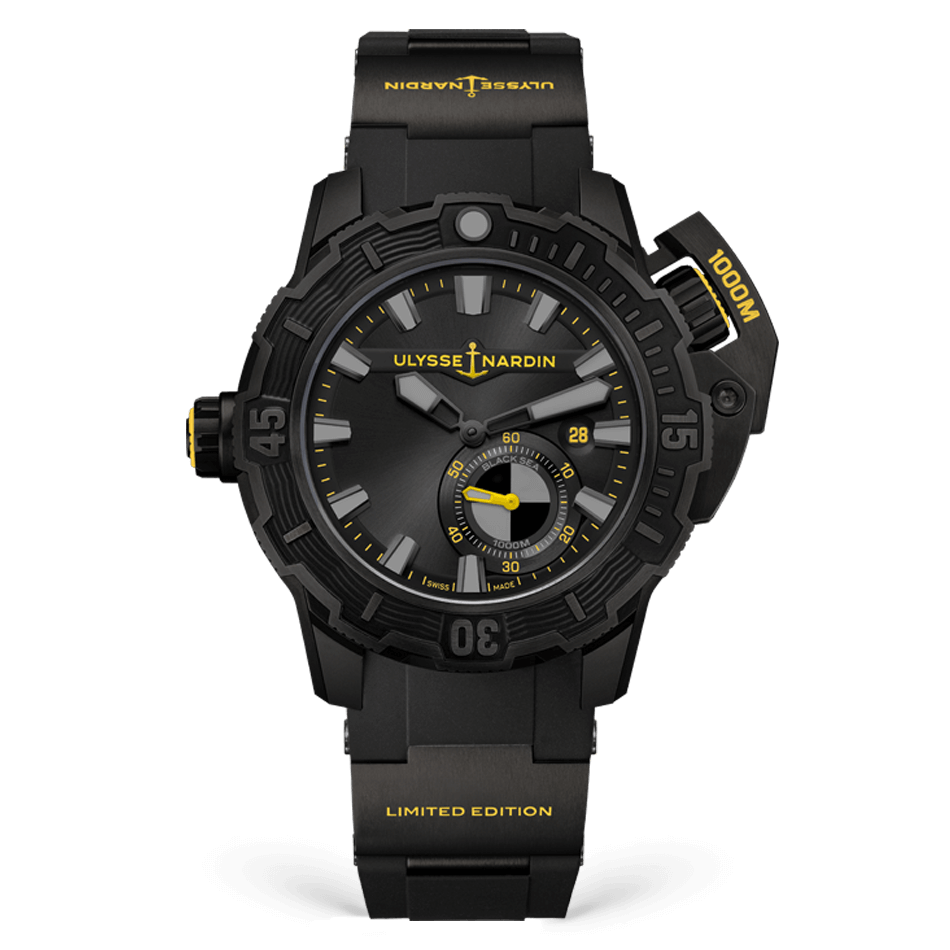